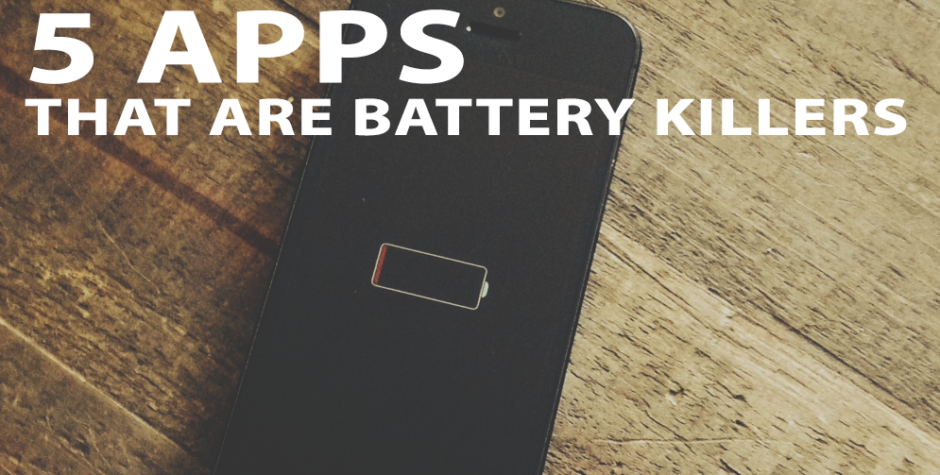 5 Apps That Are Draining Your Battery

If you’re like most people, you have at least 10 apps on your phone that you use on a daily or weekly basis. Some of those apps could be killing your battery life. Here are 5 popular smartphone apps that are notorious for draining battery:

This app is one of the most popular apps created. It is also most likely the biggest drain on your battery. A part of the reason this app is so battery consuming is because it is a resource hog on your phone in terms of processing power and internal memory. If you want to save on battery and data but still use Snapchat, turn on “Travel Mode” which will load content as needed.

Since this game came out, it has been a worldwide phenomenon. It has also been the worldwide killer of smart-phone batteries. The app itself is pretty heavy on resources, but the main reason it kills so many batteries is because of the frequency of use. In the hunt to catch more and more Pokemon, players need to turn on their GPS location service which adds to the battery drain.

This one should be fairly obvious to most users. The fastest way to kill the battery of any mobile device  is by streaming videos. The screen of any mobile device usually consumes a good amount of the battery by itself. But combined with the constant downloading and uploading, your battery will be lucky to make it through a viewing of Terminator 2.

This one might sound strange on this list, but there’s good reason for it being here. Firstly, it’s not exactly optimized for iPhone and Android. Remember the Kindle Fire? It runs great on there. Secondly, it runs in the background constantly trawling the current deals and pushing promotions. But maybe that’s just the price you pay for good deals: a dead battery.

Yes, that’s right. That innocuous little app that everybody has on their phone. From the minute your phone starts up, the Facebook app is constantly running in the background and sending push notifications. Facebook Messenger adds to the performance and battery drain as it is frequently used and constantly on.

If you use these apps, then chances are you’re going to be hitting the charger constantly. If you’re out and about with low battery, look for our phone charging kiosks or portable charging stations for a quick and convenient charge.