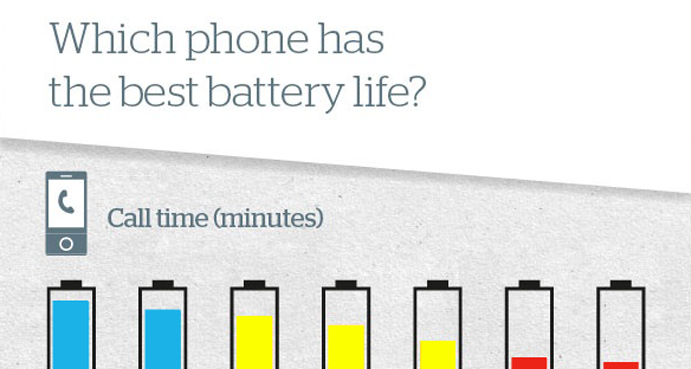 National surveys suggest that phone battery life is one of the biggest pain points for consumer and the most important feature that needs improvement in smartphones. Other features such as screen size and processing speed seem to have reached a pretty satisfactory level on modern phones but having to charge your battery multiple times daily is still required for the vast majority of them. Now that they all have quad-core processors it takes more and more power to keep one going. To effectively gauge battery performance, three different variables were measured for a total of 7 popular smartphones on the market today. 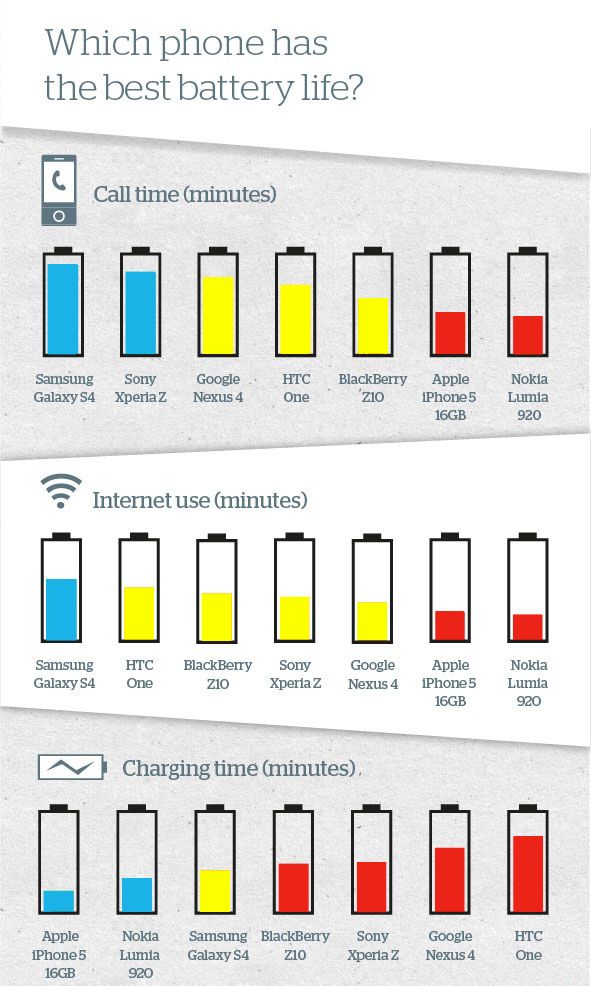 The first variable measured was what is known as talk time. Talk time refers to “normal usage” including simple tasks like calling, texting, and occasionally checking email or playing a game. The Samsung Galaxy S4 came out on top for the longest battery life of a little over 17 hours (1051 minutes) for this type of use. It has a 2,600 mAh battery which is considerably large and allows for this long life. The S4 also offers two power saving options: Power Saving mode, and an Ultra Power Saving Mode. Power saving mode saves battery by blocking background data. Ultra Power Saving Mode saves battery by applying a simplified grayscale interface and only letting you use the most essential functions for when you really need to save the juice whatever your situation may be.

Coming in close behind the S4 for talk time is the Sony Xperia Z smartphone. This phone carries a 2330 mAh battery. The Xperia Z can hold up for 16 hours (985 minutes) of normal usage and also offers one power saving mode for a longer lasting life.

On the opposite end of the scale, the poorest battery life in terms of talk time is the Nokia Lumia 920. This phone can only rack up around 7 hours of normal usage. Though the battery spec is 2,000 mAh, this phone has had a documented history of battery draining issues and so it is not recommended for people who always have their phone on them and in use during the day.

The second variable that was studied is browsing time or internet time. This is also known as “advanced usage” (a step up from normal usage mentioned above). In this day and age most smartphones are used this way by advanced users because of how necessary staying connected really is. We can see that the Samsung Galaxy S4 has come out on top again for this type of use with an average of 6.75 hours (or 408 minutes).

Again in last place we see the Nokia Lumia 920, only offering between 3 and 4 hours of browsing time. Keep in mind internet use will be considerably less because of the Wi-Fi connection it requires, but 3-4 hours nowadays is considered almost useless.

The amount of time our phones take to charge is important to look at as well. The iPhone 5 and Nokia Lumia 920 have a fast charging advantage, however, they are the 2 phones with the shortest length of battery life with regards to both normal usage and advanced usage. So, to boast that it has a quick charging time, belies the fact that its battery is one of the fastest to drain. The phone with the 3rd shortest charging time is the Samsung Galaxy S4 which has blown away all of the other phones in the other categories. It has the lowest ratio of charging minutes to usage minutes meaning only .15 minutes of charging allows for 1 minute of use.

We can see that battery life is heavily dependent on the type of use it gets, however, some phones just are much more durable with respects to staying charged when necessary. It is important to keep in mind that the Samsung Galaxy S5 has just come out last week and is expected to blow away the already winning S4. It will also be very interesting to see whether the iPhone 6 can match up to the Samsung phones this upcoming fall! Remember to keep these things in mind while choosing your new phone. Before purchasing a phone you should research how strong the battery life is for what you will be using the phone for. For example if you are someone that rarely talks on the phone it might not matter how much talk time the phone battery offers. If you are someone that is always on the go you might opt for the phone that has the fastest recharge. With this information, it makes it easy for consumers to be satisfied with their smartphone.