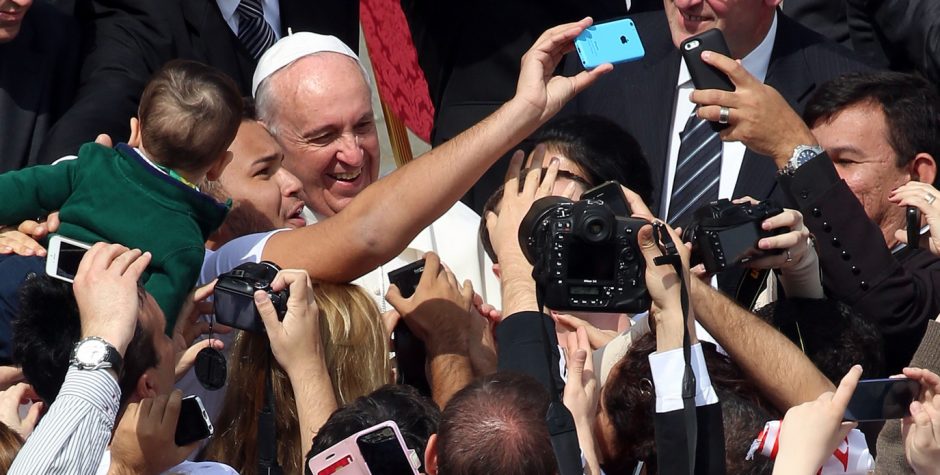 The big cell phone carriers invested millions of dollars to help keep the flock of folks connected while Pope Francis visited in Philadelphia this past month.

Excitement and cell phone demand was at an all time for Pope Francis’ two-day visit to Philadelphia  upwards of 1.5 million people use their phones for the Pope in Philly

The 1.5 million or so people crowded into Benjamin Franklin Parkway in Philadelphia to see Pope Francis wanted to use their cell phones. These lucky people texted, took pictures, selfies or videos and posted like crazy to Instagram, Facebook, Twitter and Snapchat. It’s 2015 and seeing the Pope in person is something people wanted to share with friends and family.

But, with so many doing all of this at the same time, there was a huge strain for cellular and WiFi networks. AT&T and Verizon Wireless spent a combined $47 million in Philadelphia to increase capacity on their networks.

Prior to the event, representatives for two of the region’s major wireless carriers — Verizon and AT&T — said that multi-million dollar upgrades made to their systems in anticipation of the pope’s visit Philadelphia should be able to handle the surge in use.

“It’s definitely going to be one of the biggest (events) we’ve ever tackled,” Verizon Spokesman John O’Malley said. “We’re confident the network will be up to the challenge.”

“Those lucky enough to attend are going to be holding their phones or holding their tablets wanting to capture and share these moments with friends and family and we want to make sure they can do that,” said AT&T Spokeswoman Brandy Bell-Truskey. “Nonetheless, this is a challenge, but it’s a challenge we are meeting head-on and giving everything we’ve got.”

AT&T invested $23 million in upgrading service in the Center City area, Bell-Truskey said. Verizon spent $24 million, according to O’Malley.  These efforts were done to help quadruple their service, both companies say.

Along with some permanent upgrades, temporary measures were put in place by both Verizon and AT&T, their spokespeople say, to boost wireless capacity.

Cells on wheels, known as COWs — mobile vehicles outfitted with antennas — were on the streets along the Benjamin Franklin Parkway, Independence Mall and even at St. Charles Borromeo Seminary in Wynnewood where Pope Francis stayed during his visit.

Distributed antenna systems, known as a DAS, was installed along the parkway among other areas, mainly on lampposts, and spread coverage out among the crowds.

Xfinity had hotspots throughout the area, and a representative from Comcast said the company is bolstered existing hotspots and added new ones in the papal areas. Xfinity is also offered limited usage of this WiFi for non-subscribers.

Verizon network engineers studied wireless usage on its systems at other large gatherings such as presidential inaugurations, Super Bowls and New Year’s Eve at Times Square to figure out what demands at future events such as the pope’s visit of Philadelphia would be.

No matter how much money the major carriers and other providers invested, people still experienced dead cell phones.  Why?  There wasn’t a place to charge cell phone batteries.  Companies like Veloxity sell and rent cell phone charging kiosks with secure lockers for everything from a local trade show to a Papal visit.