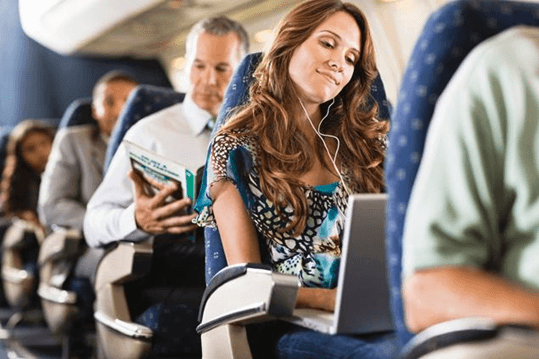 Since the beginning of media mass consumption, frequent flyers have grown more and more comfortable with enjoying personal electronic devices in-flight, despite warnings and existing rules against their use. This has led airline carriers to re-examine their current operating policies. As a result, the FAA has gone ahead and reduced regulations for cell phone use on planes. This regulation lift also stands for tablets, laptops, e-readers, as well as other electronic devices. Finally, the wait is over!… Or is it?

Most carriers are expected to complete this transition by 2013 year-end. The FAA released a statement saying that “many carriers will prove to the FAA that their planes allow passengers to safely use their devices in airplane mode, gate-to-gate, by the end of the year”. Michael Huerta, FAA’s administrator, has spearheaded this initiative, working to allow passengers to use mobile devices (in airplane mode, of course) from takeoff to landing. But were passengers doing this already?

Anyone familiar with the “airplane mode” feature knows that it functions to prevent any interference between the mobile device and the aircraft’s communication signals. Currently, the FAA only allows the use of phones, tablets, and other electronic devices when the plane is flying under an altitude of 10,000 feet (#Below10KFT) which doesn’t make sense seeing as most commercial aircraft’s fly between 20 and 40 thousand feet. That said, I don’t know about you but I’ve used my phone above 15,000 feet in the air on multiple occasions.

With the new rules, connecting mobile devices to carrier-provided WiFi as well as in-flight cellular calls and texts will remain prohibited below 10,000 feet. Flyers are not permitted to restart their devices until after the initial 10,000 foot ascent- at which point, the captain would give the go signal. After the new regulations pass, passengers will be able to watch videos, listen to music, use apps, surf the web from gate to gate as long as their devices are in airplane mode.

Before an airline can employ the new PED (Portable Electronic Device) rules, it must go to the FAA. This means that airlines have to pass standardized prerequisites enacted by the FAA. Carriers will be evaluated based on their fleets and operating policies.

JetBlue was first to pounce on this opportunity to get FAA approval. Delta, American, United, and US Airways weren’t too far behind. However, there still are some aircraft within each carrier that remain under study in the approval process. So before you book your next flight, we would recommend double checking to see if the airline and aircraft have been FAA approved for you to use your smartphone gate to gate. Or maybe just do it anyway 😉

Here are frequently asked questions about mobile devices during in-flight use.