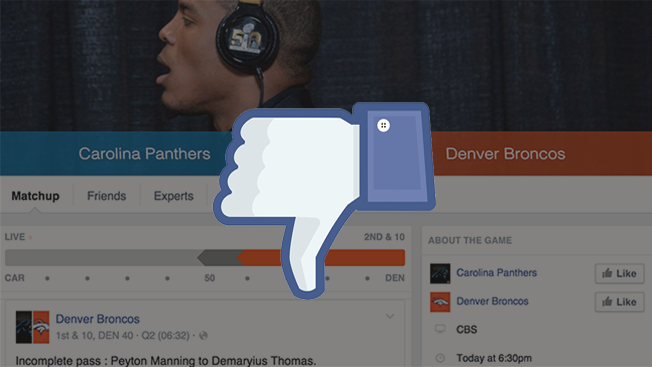 For many sports fans, simultaneously watching Twitter and a game goes together like salsa and chips.  But with interest in Twitter on the downswing and its struggle to add users and captivating features prompted Facebook be creative.

The two social media companies battled it during Super Bowl Sunday with new “second-screen” features that they say enhance the TV-watching experience.  The goal: Getting more eyeballs onto their services during the most-watched U.S. sports game of the year. And of course, score more advertising dollars.

Facebook tested its new Sports Stadium for the football battle.  The Zuckerberg company created a playbook to run sports chatter away from Twitter.

On Twitter, users clicked the lightning bolt icon at the top of the app and  were led to a section with a highlight reel of Super Bowl tweets. Writing “#SB50,” short for Super Bowl 50, in a post automatically added a football graphic to the message, making it more noticeable and easier for the company to sort. Tweets with “#Broncos” and “#KeepPounding” (a Panthersslogan) generate team logos.

That’s how it was supposed to work.

Things didn’t go as planned for Sports Stadium.  Facebook stumbled early in its attempt to capture real-time conversation during Super Bowl 50.  There were some major hiccups during the critical first half of the game.

For example, the Denver Broncos scored the first points of the game with a field goal at about 6:49 EST. However, Sports Stadium on desktop failed to show a score update until about 10 minutes later. Additionally, for some users, the desktop version said that the game started at 7 p.m. Even with all the articles that were written and shared to Facebook, for some reason, Facebook could not properly answer, “What time is the Super Bowl?

Many users who tried Sports Stadium ended up turning to Twitter to voice their frustrations. Aside from having trouble staying with the action, some people tweeted that they were underwhelmed with the amount of actual conversation about the game.

Much of the problem during the first half was because of so many users.  But come on Facebook, you knew how many people use Facebook and are sports fans.

Facebook’s Sports Stadium is no threat yet to Twitter’s live event dominance.
Sports fans are constantly plugged into the game. But they aren’t just checking in for score updates or breaking news, they also want to talk about the game, check out action photos, and ultimately advocate for their team. They are watching TV and using their cell phone.

Keeping up with the action.